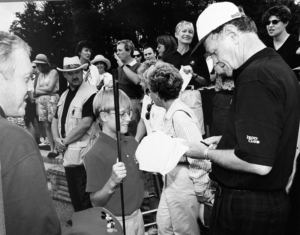 The Thornhill Club was established as a golf club in 1922. It became an all season club with the opening of the curling rink in 1963. Current facilities include an eighteen-hole championship golf course, a nine hole executive golf course, a curling rink, full fitness facility, outdoor tennis courts, golf practice areas and a clubhouse. 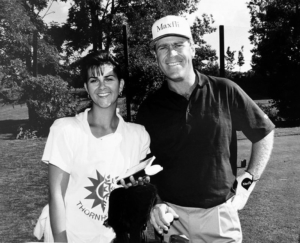 Renowned golf course architect Stanley Thompson designed the eighteen-hole golf course. The present course has retained the classic golf course design and features of a Thompson course, with strategic bunkering, the illusion of distance, dramatic variations in hole length and fairway width, intricate mounding, subtly breaking greens, and elevated tees. The clubhouse, in the midst of well-landscaped gardens and walkways, is situated to provide a scenic vista overlooking the golf course.

Golf legend Byron Nelson is forever linked with The Thornhill Club, the site of one of golf’s greatest records.

In August, 1945, Nelson had just won his tenth consecutive PGA Tour tournament, with a score of 19-under par. He moved from Chicago to Canada to play the Canadian Open a week later in a field that included greats like Sam Snead, Claude Harmon, and Canadian Stan Leonard. Thornhill’s second club professional, Arthur Hulbert, and his successor, the legendary Joe Noble, also competed.

The entire four days of the tournament were played in hot, steamy weather that took its toll on players and spectators. Nelson showed up for his final round very tired, but after making par on the first hole, he proceeded to the 2nd hole and topped his tee shot into the river below. 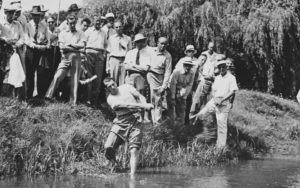 After taking a drop, he hit his third shot into the river again, leaving him 135-yards. As Byron walked up the fairway he was thinking ahead to another penalty drop, a fifth shot to the green and a possible triple bogey. When he got to the river the ball was visible since the extreme hot weather had dried up much of the riverbed. He was able to hit his fourth shot to the green about ten feet from the pin and made a fantastic bogey five.

Nelson’s Canadian caddy later became a golf pro in the U.S. and when interviewed in 1995 on the 50th anniversary of Nelson’s win, he remarked in all his fifty years as a golf professional, Nelson’s bogey on the 2nd hole at Thornhill was the greatest he had ever seen.

Nelson continued his strong play until he reached the 11th hole, now known as “Nelson’s Folly.” During the final round, Nelson attempted to drive the 11th, ended up in trouble and made a bogey, giving the hole its moniker.

However Nelson was able to hang on to finish with a score of 280, the only PGA Tour tournament he won at even par up until that time. With the win Nelson chalked up his 11th straight victory, a mark that has not been matched since.

Nelson went on to win a further six PGA Tour tournaments in 1946 and then announced his retirement the end of the year, though he was only 34 years old.

Stanley Thompson’s most famous courses still remain the tracks against which all other Canadian courses are compared. One of only two Canadian architects with a course amongst the Top 100 in the world according to Golf Magazine, each year tens of thousands of Canadians and tourists from around the globe flock to see Thompson’s work across the country. His best-known courses—like Jasper Park Lodge, Capilano, and Highlands Links—are considered Canadian golfing treasures.

Thompson’s influence is so pervasive that almost every Canadian golf designer currently working, from Thomas McBroom and Doug Carrick through to Ian Andrew, have all incorporated elements of his design style. 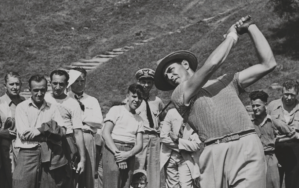 That’s not surprising, and even as some of his courses near the century mark, they remain the examples against which all others are judged. That’s likely because they remain testaments to their creator’s desire to make them match their settings.

In his booklet About Courses: Their Construction and Upkeep, published in 1923, Thompson stated, “Nature must always be the architect’s model. The development of the natural features and planning the artificial work to conform to them requires a great deal of care and forethought.”

That’s the case at Thornhill, as it is at Thompson’s other courses, which numbered more than 100 across Canada, the U.S., South America and the Caribbean.

As the Ottawa Citizen said about him in its eulogy, “Stanley Thompson has left a mark on the Canadian landscape from coast to coast. No man could ask for a more handsome set of memorials.”

The Thornhill Club’s course was designed by Stanley Thompson in 1922 and has been the host of the PGA Canadian Open. It’s filled with strategic bunkers, subtly breaking greens and elevated tees. It’s the kind of course that will make you reach for every club in your bag and make you a better golfer for it. In short it’s perfect. 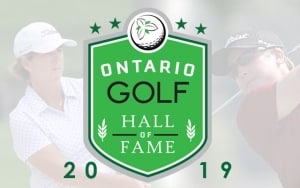 Golf Ontario is proud to announce this year’s Class of the Ontario Golf Hall of Fame. Deborah Lee Eldridge, Judith Kyrinis, and Richard Scott, will become the newest members of the Hall at the official induction ceremony on May 1, 2019 at Wooden Sticks Golf Club in Uxbridge. In addition, Scott Metcalfe will be receiving the Lorne Rubenstein Media Award, presented annually to accredited members of the Ontario media for “major contributions to golf.”

Also entering the Hall in the Amateur Golfer category is Judith Kyrinis, 54 of Thornhill. Judith, a member of both The Thornhill Golf Club since 1996 and Granite Golf presently, truly exemplifies the description of champion and hall of famer.

Judith has established a prominent record as an amateur golfer in Ontario, Canada and the United States, participating and winning local, provincial, national and international amateur Championships.

Being a busy and involved mother of three while balancing a demanding nursing career consisting of the Intensive Care Unit and Pre-Admission Clinic at Toronto General Hospital, it is no wonder that much of her outstanding success in golf came later on in her golf career.

In the provincial spotlight, Judith has amassed an unbelievable amount of accomplishments. She was the 1998 Ontario Women’s Match Play Champion, the 2009 Women’s Four Ball Champion (with Susan Wickware), the Ontario Senior Women’s Champion for 2016, 2017 and 2018, and the Ontario Ladies Mid-Amateur Champion for 2017. 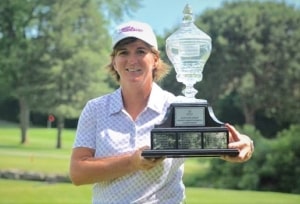 Other accomplishments include being the #1 ranked golfer for Ontario Senior Women in 2014 and 2016, #1 ranked for Ontario Mid-Am Women in 2016, and voted the Top Female Golfer of the Year by the Golf Journalists Association of Canada for 2017.

Thank you for your inquiry.
A member from our team looks forward to connecting with you shortly.